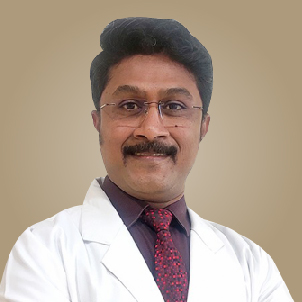 Dr. Roopesh N is an Eminent and skilled Gynaec-oncologist in the state and is the only Indian Gynecologic Oncologist to have been selected and pursuing the prestigious European School of Peritoneal Surface Oncology ((F.P.S.O, Italy) Fellowship under the aegis of the European Society of Surgical Oncology (ESSO) for which he has had stints at NCI, Milan, Medizinische Universität Wien, Vienna, etc. He has also been trained from prestigious institutes like Mie University, Japan; NUH, Singapore; Tata Memorial Hospital, Mumbai, etc
With an experience of over 15 years, he has clinical and surgical expertise and has handled many complex gynecological and onco-surgical procedures.